Solar farms can be turned into biodiversity hotspots. The biosolar roof project aims to promote this at roof level. Whilst at ground level, the synergy between producing energy and creating habitat for biodiversity is coming to the fore, there is little understanding in the mainstream of how this can be done at roof level. Creating habitat with solar panels on roofs is achievable – particularly for pollinators. 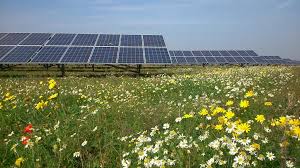 This is what the Biosolar roof project aims to promote. The project will provide the technical training to do these kind of roofs as well.

In the UK, there are a few projects where this kind of project has been achieved.  In London, where there is both a policy for green roofs  and also for renewable energy,  there are still many examples of the separation of the technologies on new developments. One roof houses the PV panels and another roof the solar panels. This is primarily due to a construction mentality that tends to separate out technologies.

Renewable energy can be a focus for engineers and architects to interface with Climate Change and Low Carbon strategies at both a local (London) National  and European level.  However there are also strategies and policies at local, national and European level for biodiversity. Therefore combining Solar technology and green roofs designed for biodiversity is the way forward to address these policies and strategies. Furthermore the green roof element will provide the full range ecosystem services within the green infrastructure agenda. This is the biosolar vision for the Urban realm.

So if Solar Farms at ground level can create biodiversity hotspots then biosolar roofs will create similar hotspots at roof level.