The clifftop green roof in Cornwall has featured a lot over the years. Of course it is rather special being the  being the first and last green roof in England. Built in 2011 the summer house has matured and provides a little patch of clifftop vegetation high above Sennen Cove.The roof rests on the Top Cottage, which is available for rent. Geoff and Julie, the owners, just so happen to be good friends of John Little too.

Clifftop green roof – the way to go is native

Geoff and Julie used our seminal online guide to construct the roof. Going native was an important aspiration. They, therefore, chose to use a local granite sourced from a nearby quarry. However, the substrate contained very little organic material. Being a clifftop green roof, the weather lashing in off the Atlantic hits the roof hard. Locally sourced thrift did flourish, yet the owners wanted a greener feel. They, therefore, added some more soil and compost. The net result is a greater variety of wildflowers and grasses.

It looks like a few sedums have volunteered their services onto the roof. These are probably the native species, Sedum acre. Native sedums are good, especially when they colonise themselves.

Obviously the original substrate was too lacking in organic material to green up. Although extensive green roofs should be low in nutrient content, they do need a small percentage. This is generally between 15 – 25%. This allows the roof to develop into a dry grassland, whether it is exposed to the harsh weather of a Cornish winter or more benign climates. 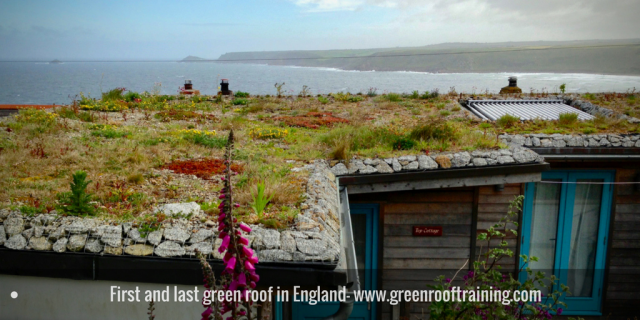 The owners say that it is interesting how the roof changes year on year. The weather over winter and through spring, in any given year, tends to lead to a different regime of plants. Two years ago in 2016, Evening primrose turned up. Also known as ‘Evening star’ this was quite a surprise. However, some plants are constant like the thrift and, interestingly, liverworts. The damper climate out in South West England probably allows these plants to flourish more so than in London and Essex where the authors are based.

‘It’s looking a lot greener now, which helps, as it is very visible, which of course is one reason we chose to do it as a green roof.’

Why not check out previous blogs on this roof to see how it has changed over the years:

The first and last green roof in England

It’s not just biodiversity that benefits, so does the house

South Cornwall gets significantly more sun than the rest of the UK. Prior to green roof being installed, the inside of the house often became quite hot. Now with 10 tonnes of substrate on the roof, the house remains cool even on the hottest of days. Geoff and Julie also point out that they have noticed that there is very little stormwater run-off coming from the roof. Furthermore, as Geoff is an architect, he is impress in how the green roof protects the EDPM membrane.

Geoff and Julie not only purchased the guide but also attended one of our workshops. So if you too want to create a green roof on your shed, outhouse, extension or summer house join in too. Furthermore, you may be interested in the Designing for Urban Nature workshops and conference we will be holding on 21st July in Essex. If you are interested do get in contact.

We use cookies to ensure that we give you the best experience on our website. If you continue to use this site we will assume that you are happy with it.Ok